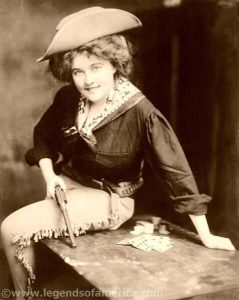 Kitty Leroy was a notorious entertainer and card player in the American Old West. In her short, tempestuous life, Leroy was married no fewer than five times and eventually shot dead by her fifth husband, who subsequently committed suicide, at the age of 28. Leroy is believed to have been born in Michigan in 1850, but little is known about her early life. She is first recorded, as a dancer, in Dallas, Texas in 1875, where she was a regular performer – billed as ‘Queen of the Hoofers’ – at Johnny Thompson’s Variety Theatre.

Leroy later sought fortune in San Francisco but, having missed the peak of the California Gold Rush, found slim pickings and quickly moved on to the next gold boomtown, Deadwood Gulch, in the Black Hills of South Dakota. In Deadwood, Leroy opened the successful Mint Gambling Saloon, which also housed a brothel, of which she was madam. She married her fifth husband, Samuel Curley, in 1877, but their relationship – which was based, first and foremost, on a shared love of gambling – soon soured and Curley left Deadwood for a lengthy period. When he returned the following year, his attempt at reconciliation failed and, in desperation, he shot Leroy in the chest before turning the gun on himself.