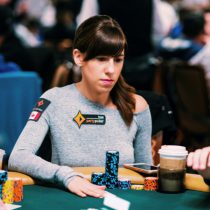 Canadian professional poker player Kristen Bicknell reportedly began her love affair with Texas Hold’em at a college poker night while a freshman at the University of Ottowa in 2006. Thereafter, she started playing poker online under the pseudonyms ‘krissyb24’ and ‘krissy24’ and has been prolific in that sphere ever since, with over $1.7 million in total online earnings, at the last count. Bicknell collected her first live cash, just $845, at the Turning Stone Poker Classic in New York City in 2006 but, having subsequently turned her attention to live poker, she has since accumulated over $3.7 million in total live earnings in her career to date.

Indeed, her first six-figure payout, and World Series of Poker (WSOP) bracelet, came in 2013, when she beat 953 other female players to the $173,922 first prize in the $1,000 No Limit Hold’em Ladies Championships at the Rio All-Suite Hotel & Casino in Las Vegas. Three years later, Bicknell returned to the same venue to win a second WSOP bracelet, plus $290,768 in prize money in the $1,500 No Limit Hold’em Bounty. However, she recorded he best live cash, so far, when collecting $328,500 for an eleventh place finish in the PokerStars Caribbean Adventure (PCA) PokerStars Players Championship at the Atlantis Resort & Casino on Paradise Island, in the Bahamas, as recently as January, 2019.