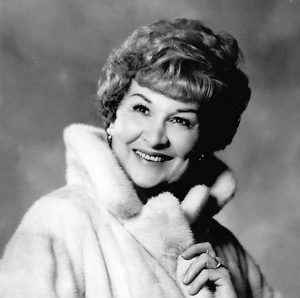 The late Judy Bayley, who died of cancer in 1971 at the age of 56, was affectionately known as ‘The First Lady of Gambling’ and is best remembered as the owner of the Hacienda Hotel and Casino on the Last Vegas Strip. Born in Dallas, Texas, Bayley married Californian hotelier Warren ‘Doc’ Bayley in 1936 and, in 1956, they opened the Hacienda Hotel, followed by the Hacienda Casino a year later.

Warren Bayley died in 1964, leaving Judy Bayley to take over operations and making her, in fact, the first woman to own a Nevada resort outright. A graduate of Southern Methodist University, but with no formal business training, Bayley nonetheless recognised that publicity was the key to making a profit in the casino business. A tall, striking woman, Bayley was frequently photographed, often in furs and jewellery, by way of promoting herself and her resort.

Aside from her business acumen, Bayley also commissioned the famous Hacienda Horse and Rider – the classic neon sign, featuring a 40-foot cowboy – now on display of Fremont Street, Las Vegas and was well known for her philanthropic activities. The ‘Judy Bailey Theatre’ at the University of Las Vegas, which opened in 1972, bears her name.